The Frontier Gandhi: A Torch for Peace 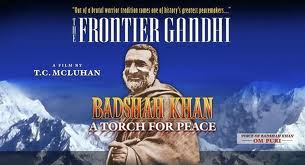 Twenty-one years in the making, The Frontier Gandhi: Badshah Khan, A Torch for Peace launches into orbit the epic story of a remarkable Muslim peacemaker born into Pashtun warrior society of the strategic North-West Frontier Province of the Indian subcontinent — now Pakistan’s frontier region Kyber-Pakhtunkhwa. Pronounced “a miracle” by Mahatma Gandhi, Badshah Khan (1890-1988) raised a 100,000 strong nonviolent army of men, women, and young people — the Khudai Khidmatgars, or servants of God — drawn from the multi-ethnic traditions of Afghanistan and India. This movement united diverse tribes for an astounding 17 years to end British colonial rule. They were Muslims, as well as Hindus, Christians, Parsees, Sikhs, and Buddhists came together in the cause of peace, social justice, religious tolerance, and human dignity for all.

“In our fight for freedom, women stood shoulder to shoulder with the men in the Khudai Khidmatgar movement. We tended to the wounded. And we did whatever else we could to support the cause of nonviolence.”
–Lady Husn Afroza, A Khudai Khidmatgar (servant of God, soldier of peace), Pakistan

Nominated twice for the Nobel Peace Prize, Badshah Khan’s improbable life and legacy remain little known. He died in 1988 at the age of 98 having spent nearly 35 years in solitary confinement for his efforts to humanize humanity.

For a in-depth review of events in Afghanistan at the time of his death in 1988 look at this article from Eqbal Ahmad and Richard J. Barnet

To understand the legacy he left in Pakistan read Missing Badshan Khan
Posted by Peter at 7:25 AM