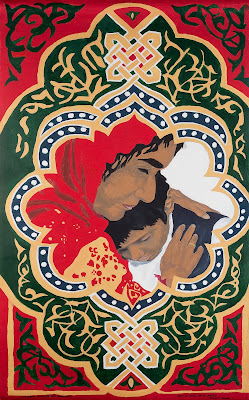 The Afghanistan Rights Monitor a Kabul-based independent human rights organization has asked the United States government to investigate its military units in the wake of publication by German news magazine Der Spiegel of US soldiers posing with the corpses of Afghan civilians they allegedly killed.

"Details of the kill team's shocking crimes are unclear as the US military has kept everything in the dark apparently in order to protect its image and to avoid potential social unrest in Afghanistan,' Afghanistan Rights Monitor (ARM) said in a statement.

'The kill team's crimes are utterly unjustifiable and so are the efforts to conceal or camouflage them..."

The Afghans for Peace web page has more background to the story.

The soldiers involved belonged to a Stryker Brigade Combat Team dubbed 'kill team' for its disproportionate killings operated in the volatile southern province of Kandahar in Afghanistan in 2010.

A couple of wars ago I was on a panel organized by the First Person arts festival here in Philadelphia with Colby Buzzell. He was promoting his new book ‘My War: Killing Time in Iraq.” He was a part of a Stryker Brigade Combat Team in Iraq. Currently 12 members of a Stryker Brigade are now on trial for murder in Afghanistan.

What was clear from his book - and his comments - is that the broad open-fire orders and a mission "to locate, capture and kill all non compliant forces" created an environment where everybody was seen as the enemy.

Additional Resource: War in the Digital Age
Posted by Peter at 9:04 AM