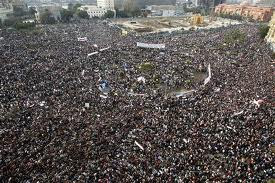 Juan Cole writes on the impact of US policy in the Arab World. Highlighting the power of non-military (people centered) alternatives that can transform oppressive governments.

“The claim that George W. Bush’s war of aggression against Iraq somehow opened up the Middle East to reform is an affront to the brave crowds that have risked their lives to change the American-backed order in that part of the world. Bush’s invasion was followed by no significant reforms in the region, whereas the outbreak of people power today has scared autocratic regimes into making unheard-of concessions. Iraq itself is no shining beacon on a hill for the people of the Middle East, but rather is a target of protests and an object lesson among the protesters of what to avoid.”