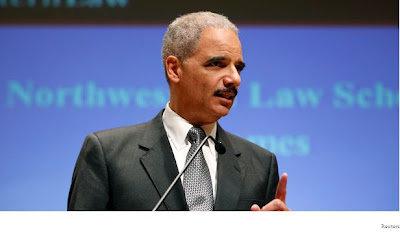 Targeted killings are also at the core of the deadlock in the US-Afghanistan Strategic Partnership. The government of Afghanistan would like the U.S. to turn over all prisoners it holds on its territory and to stop the kill/capture policy of the night raids that have left so many dead.

Most importantly, it is a defense of the deadly drone program run by the CIA.

Here is what the ACLU had to say.

"In remarks delivered at the Northwestern University School of Law today, Attorney General Eric Holder provided the Obama Administration’s most detailed public description yet of the legal authority under which it believes it can carry out targeted killings, including of U.S. citizens abroad. Unfortunately, the remarks still amounted to a broad defense of the government’s claimed expansive authority to conduct targeted killings far from a battlefield, without judicial review of its legal justifications or evidence, either before or after a killing. The remarks also mischaracterized the debate over the need for judicial review of targeted killing decisions"

"As Holder’s speech demonstrates, though, judicial oversight is critically important given the breathtaking authority the government has claimed. Holder acknowledged that all U.S. citizens, including those accused of being terrorists, have a right to due process under the Constitution, but he argued that the Executive Branch, alone, should determine whether the due process requirement is satisfied when the government claims law of war or self-defense authority to kill. In a system of constitutional checks and balances, that simply cannot be the case. Courts must have a role in determining whether the government’s authority to kill its own citizens is legal and whether a decision to kill complies with the Constitution. Otherwise, the government can wield the power to take life with impunity. We should not trust any president – whether this one or the next – to make such momentous decisions fully insulated from judicial review. As the Supreme Court has admonished, “a state of war is not a blank check for the President when it comes to the rights of the Nation's citizens.”

Additional Resources: A view from the ground in Chicago.

This morning's Washington Post editorial makes this point. The administration “should release the Justice Department memorandum that lays out the domestic and international strictures which, it says, undergird its drone policy.”
Posted by Peter at 10:20 AM