Cluster | A Poem by Zein El-Amine

Zein El-Amine and Esther Iverem are two poets who read at the Windows and Mirrors opening last night in DC. 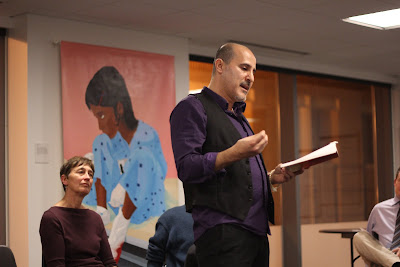 The picture shows Zein and Ann Northrup one of the muralists who shared her thoughts on art as activism and the goals of her work Mountain Kites.

This is one of the poems he read.

“What we did was insane and monstrous.”
Head of IDF rocket unit, July 2006


On his last evening
Abu Ali walked home
between the rows of pine
that line his driveway,
settled in the shelter
of his grape arbor, rolled
a cigarette, was served tea
by his wife,
who was preparing
for the expected arrival
of unexpected guests.
He spotted a cluster
above his head
and tugged at it.
The stem snapped,
the concealed cylinder slipped,
its yellow ribbon followed,
fluttered down,
like a ticker tape.
A dull pop was heard.
A flash lit up the arbor –
Abu Ali’s last dispatch
to Marjiyoon’s children.

All throughout that month,
that followed the Summer Rain,
he had gathered
the kids wherever
he found them.
Showed them pictures,
of all the colors
that these things come in –
one next to a cell phone
to give them a sense
of scale. One of a boy,
sitting in a hospital,
seeming to kneel,
seeming to pray.

He held his lectures
under the cover of one tree
or another: under the fig
trees, with their fruit
in red August burst,
or under the sparse shelter
of a fruitless pomegranate.
The people of Marjiyoon
say, that on his last day,
he was seen near the cemetery
sitting in the sprawling shade
of the twisted branches of an olive tree.

Zein El-Amine, a contributor to Foreign Policy In Focus, has an MFA in poetry from the University of Maryland. His poems have been published by Folio, Beltway Quarterly, DC Poets Against the War Anthology, Penumbra, GYST, and Joybringer. His short stories have appeared in the Uno Mas and in Bound Off. His editorials and articles have appeared in Left Turn, The Afro American, The Washington Spark and The Washington Post. Melissa Tuckey is the poetry editor for FPIF and a board member of Split This Rock.
Posted by Peter at 12:23 PM