Taliban Suspend Talks | Karzai Demands US Back to Bases 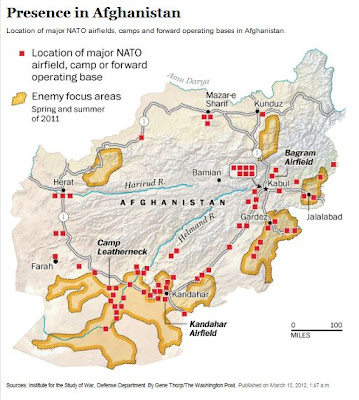 The decision by the Taliban to suspend talks, and the demand by President Karzai that all US and NATO troops leave the village-centered forward-operating bases, are fundamental rejections of current US policy.

The murder last weekend of 16 Afghan civilians by a US soldier is being used by President Karzai to demand (once again) that US and NATO forces vacate the forward-operating bases scattered across the country. These bases are the launch pads for kill/capture operations and night raids that have angered Afghans across the country.

The map above does not show all the bases that the US and NATO have in the country but it gives a sense. Last week Nick Turse documented the real number as more than 450.

Kate Clark has an analysis of the Taliban statement released yesterday. It should be no surprise that the presence of foreign troops it at the core of their demands.

‘… the Afghan issue has two main dimensions; one is internal and the other external… Until and unless the external dimension is settled which rests entirely in the hands of the foreigners, discussing the internal dimension is meaningless and is nothing more than a waste of time. Therefore the Islamic Emirate considers talking with the Kabul administration as pointless.’ - Taliban Statement

“There has been a worrying lack of urgency from the Americans about the opportunity for talks provided by the Taleban’s opening on 3 January of a political office in Qatar. The move, which necessarily had been approved by Washington, was proof of some political courage by both sides, something tangible emerging from their months’ long dance of comments which had appeared aimed at somehow encouraging the other or mitigating their fears (for detail, see AAN blog). However, the timing of the Qatar office opening was always going to be tricky. Early January did not give much time to come up with something more solid before the Taleban had to either decide to keep talking or start rousing the rank and file to go back into battle after their winter rest.

The Taleban have now suspended the political process unilaterally. The statement, unusually for the Taleban holds back on the rhetoric and insults and instead concentrates quite soberly on making political points. They said the US envoy in his latest meeting presented new conditions which contradicted an already agreed memorandum of understanding. The Americans, were they said, ‘wasting time’. (The full text of the Taleban statement can be seen at the end of this piece).

The statement says the ‘diplomatic office in Qatar was opened with the purpose of ‘reaching an understanding with the international community’ and of ‘addressing some specific issues with the American invaders.’ It said the Taleban wanted to be able to have face-to-face dialogue in ‘complete freedom’ and ‘away from danger’ and to silence critics who said the Taleban had no address (where they could be spoken to) or was just a ‘warring faction’ which had no political or administrative capacities and wanted to harm other nations. To this end, the statement said, they ‘started holding preliminary talks with the occupying enemy.’

Ahmad Rashid writing earlier this week in the financial times raised the same point. Arguing that the Government of Afghanistan can’t seek a long-term US military presence and peace with the Taliban.

Additional analysis: Taliban
Posted by Peter at 9:58 AM