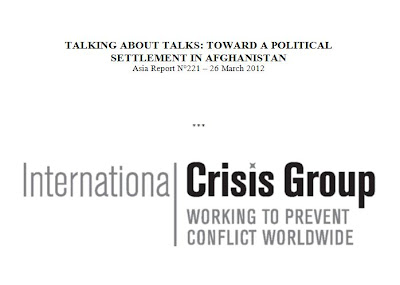 The International Crisis Group is a policy-oriented think tank focused on conflict and areas of conflict. This detailed report (51 pages) is hard-hitting and critical. What is missing is a focus on the role civil society should play in any comprehensive peace process and the influence of the US military.

You can find a good introduction here on the dangers of a US-Afghanistan strategic partnership here. And a good survey on the need to have civil society organizations involved in all aspects of negotiations here.

Talking about Talks: Toward a Political Settlement in Afghanistan

“No matter how much the U.S. and its NATO allies want to leave Afghanistan, it is unlikely that a Washington-brokered power-sharing agreement will hold long enough to ensure that the achievements of the last decade are not reversed. A lasting peace accord will ultimately require far more structured negotiations, under the imprimatur of the UN, than are presently being pursued. The Security Council should mandate Secretary-General Ban Ki-moon to appoint a small team of mutually agreeable mediators as soon as possible to ensure that critical stakeholders are fully consulted and will remain engaged in the negotiations process.”

A History of Failure (excerpt)

“For 35 years, Afghanistan has been shaped by repeated failures to negotiate a sustainable political settlement. Each stage of the conflict, starting with the violent coup against Prime Minister Sardar Mohammad Daoud Khan in 1978, has been capped by government programs to reconcile parties to the conflict. In each case, the attempt to broker a peace has suffered from intrinsic design flaws and lack of adequate support from the international community that has allowed external actors to undermine it. The root of these repeated failures lies primarily in confusion over the elements of reconciliation and disagreement over the desired end-state of a negotiated settlement. The successive rise and fall of Afghan governments – Daoud’s, the Soviet-backed People’s Democratic Party of Afghanistan (PDPA), the mujahidin under Rabbani and the Taliban – also provided little room for manoeuvre, let alone sufficient time to carve out lasting compromises on the political and constitutional contours of the state.”

“However, by September 1987, the Soviets delinked the issue of withdrawal from the shape of the future Afghan government and began bypassing the UN in favour of backchannel bilateral talks with the U.S. The tempo was dictated primarily by the ebb and flow of relations between the superpowers, but the focus was always on a formula for withdrawing Soviet troops and eliminating covert U.S. support for the mujahidin. Despite informal UN efforts to push parties to the conflict toward an agreement that also outlined the status of the government in Kabul following the withdrawal of foreign forces, the Afghan government essentially became a casualty of superpower politics and factional infighting among the seven main mujahidin parties. As agreement on the timetable for Soviet withdrawal began to take shape, political tensions between the mujahidin factions also emerged.”

Link to the full report
Link to Executive Summary and Recommendation
Posted by Peter at 12:48 PM