The President’s of Iran, Afghanistan, Pakistan and Tajikistan began meeting yesterday in the Tajik capital Dushanbe for discussions on regional security.

“The four leaders – who were together for Nowruz celebrations hosted by the Tajik leader –discussed matters of mutual interest, including ways and means to strengthen trade and economic cooperation, among their countries.”

In addition to serious regional security concerns, the meetings have been dominated by needs of the participants to produce, sell and purchase critically needed energy supplies.

Turkmenistan has one of the world’s largest reserves of natural gas and has long sought access to markets in India and Pakistan. They are also interested in an alternative to the northern route that is controlled by Russia.

The Iran-Pakistan pipeline is in red below. A US-India nuclear deal (done outside the NPT) convinced the government of India to back out of the project. See the link below for more details. 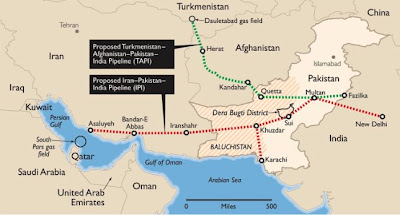 “In a clear snub to the United States over its sanction threats, Pakistan has reassured Iran and other regional countries that the proposed gas pipeline projects will go ahead as planned.

Ahead of a key regional security summit in the Tajik capital, President Asif Ali Zardari told his counterparts from Iran, Afghanistan and Tajikistan that his country was committed to completing the Iran-Pakistan (IP) and Turkmenistan-Afghanistan-Pakistan-India (TAPI) gas pipeline projects. “I look forward to working with you on all issues of mutual interest,” he added.

US Secretary of State Hillary Clinton warned earlier this month that Pakistan could face US sanctions if it pressed ahead with the gas pipeline project with Iran. “[This] would be particularly damaging to Pakistan because their economy is already quite shaky,” Clinton had told a Congressional hearing.

At Sunday’s quadrilateral meeting in Dushanbe, Presidents Asif Zardari, Hamid Karzai, Mahmoud Ahmedinejad and Emomali Rahmon renewed their resolve to put up a joint fight against terrorism, militancy and drug trafficking for a ‘win-win situation’. They also agreed to tap the full economic potential of the region by strengthening trade and economic cooperation among them.”

“Presidential spokesperson Farhatullah Babar later said that President Zardari underscored the need for enhanced regional cooperation to overcome the drug trafficking-militancy nexus – a major impediment in the trade and economic development of the region. The president said he had taken up the issue at international level and would continue to pursue it adding. “We must work together.”