US Military to Transfer Control of Largest Prison to Afghans 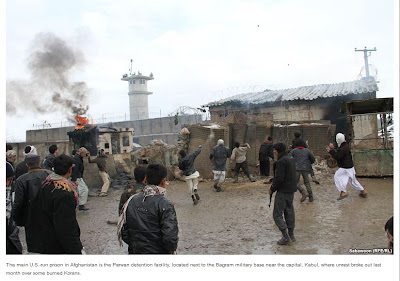 AP has the details on the last minute deal to gradually turn over US held prisoners at Parwan detention center to Afghan control. Parwan is the largest US run prison in the country and the site where religious items, including Quran’s, were destroyed last month.

U.S. and Afghan officials have said this is a major step towards a strategic partnership agreement that would outline the legal status of US military forces beyond 2014. The governments want the agreement before the May NATO summit in Chicago.

The deal will allow the US military to monitor operations and continue to “provide logistical support for 12 months, and a joint U.S.-Afghan commission will decide on any detainee releases until a more permanent pact is adopted, according to U.S. officials involved in the negotiations — a setup that will essentially give U.S. officials power to veto any release.”

“KABUL, Afghanistan (AP) — The U.S. military and the Afghan government sealed an agreement Friday on the gradual transfer of control of the main U.S. prison in the country, a last-minute breakthrough that brings the first progress in months in contentious negotiations over a long-term partnership.

The compromise deal came on the day Afghan President Hamid Karzai had set as a deadline for the Americans to hand over the Parwan prison.

The agreement gives the U.S. six months to transfer Parwan's 3,000 Afghan detainees to Afghan control. However, the U.S. will also be able to block the release of prisoners, easing American fears that insurgents or members of the Taliban could be freed and return to the fight.

The deal removes a sticking point that had threatened to derail talks that have been going on for months that would formalize the U.S.-Afghan partnership and the role of U.S. forces in Afghanistan after NATO's scheduled transfer of security responsibility to the Afghan government at the end of 2014.

Another major sticking point in the negotiations remains unresolved: night raids by international troops on the homes of suspected militants. Karzai has demanded a halt to the raids, which have caused widespread anger among Afghans.

U.S. and Afghan officials have said that they want a strategic partnership agreement signed by the time a NATO summit convenes in Chicago in May.”

“The deal gives the Americans the extension they wanted for Parwan, a U.S.-run prison adjoining its Bagram military base north of Kabul, but also spells out an American commitment to a firm transfer date for the first time. Previously, the U.S. has always offered "target dates" rather than deadlines.

Under the deal, an Afghan general will be put in charge of Parwan within days, but the Americans have a six-month window to transfer detainees to Afghan oversight, according to presidential spokesman Aimal Faizi.

The U.S. military will still be able to monitor operations. It will continue to provide logistical support for 12 months, and a joint U.S.-Afghan commission will decide on any detainee releases until a more permanent pact is adopted, according to U.S. officials involved in the negotiations — a setup that will essentially give U.S. officials power to veto any release. The Afghans also have agreed to grant human rights groups regular access to detainees. Last year, the United Nations found evidence of torture at a number of Afghan-run prisons.

The officials, who spoke anonymously to discuss confidential talks ahead of the signing, said the first 500 detainees are expected to be transferred in 45 days. The U.S. government had already handed over a few hundred detainees to the Afghans before the agreement was signed.

The officials said the deal does not apply to the approximately 50 non-Afghans at Parwan, who will remain in U.S. custody.

The officials also said that they still need to work out how to handle new detainees. Currently, the U.S. military assesses whether people captured on the battlefield are a threat and then either lets them go, hands them over to Afghan authorities or sends them to Parwan.

The U.S. also operates what it has described as temporary holding pens for gathering intelligence from detainees in Afghanistan; officials have confirmed anonymously that some detainees have been held at these centers for up to nine weeks. The agreement does not appear to address these sites.”

“The U.S.-Afghan strategic partnership is expected to provide for several thousand U.S. troops to stay and train Afghan forces and help with counterterrorism operations. It would outline the legal status of those forces, their operating rules and where they would be based.

The agreement is also seen as a means of assuring the Afghan people that the U.S. does not plan to abandon their country, even as it withdraws its combat forces.”

The ICRC in Afghanistan

The ICRC has been visiting detainees at the Detention Facility in Parwan (DFIP, formerly the Bagram Theater Internment Facility), located on a US military airbase north of Kabul, since January 2002, three months after the conflict in Afghanistan began in October 2001. As of the end of 2011, the ICRC had carried out a total of 160 visits at the detention facility. Of the approximately 3,000 detainees currently held there, most are Afghans captured by the US-led coalition in southern and eastern Afghanistan. Since the beginning of 2008, the ICRC has also had access to detainees at several US-run field detention sites in Afghanistan where they are held temporarily before being released or transferred to the DFIP.

As part of a planned gradual decrease in the US military presence in Afghanistan from 2011, the DFIP and many of the persons held there are to be transferred over time to the Afghan government authorities. The ICRC maintains a constructive dialogue with the US and Afghan government authorities on how to conduct this transfer process in a way that reflects humanitarian concerns, respects detainee rights and adequately prepares the Afghan judicial and penitentiary authorities for handling the additional detainee population.
Posted by Peter at 12:16 PM