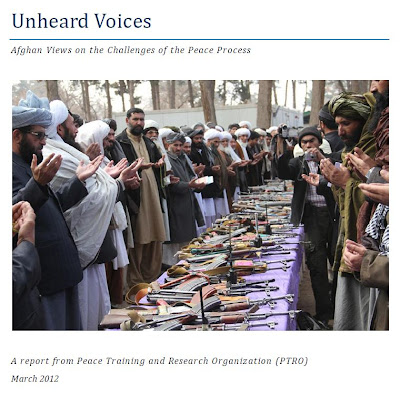 An interesting report/survey on Afghan opinions. More than simply a challenge to the Afghan Peace and Reintegration Programme(APRP), it is in fact, a good measure of what Afghans see as the path forward. There is consensus, that all Afghans need to be at the heart of a peace process, and that process must include concepts of transitional justice. The evidence is captured in the key point summary below.

“Many people see the obstacles to the peace process as external to the country, whereas solutions are more readily identified as internal. Locally, specific conditions in localities such as Marjah and Qadis, in Helmand and Badghis, showed distinct perspectives on questions related to Taliban demands and government strength respectively.”

Unheard Voices – Afghan Views on the Challenges of the Peace Process

"Ordinary Afghans are tired of the fighting and overwhelmingly want peace – but not if it means a loss of hard-won rights, according to a major new survey of nearly 5,000 Afghans.

The survey, outlined in a report released today called Unheard Voices – Afghan Views on the Challenges of the Peace Process, was conducted in 16 provinces, including war-torn Helmand and Kandahar, by the Kabul-based Peace Training and Research Organisation (PTRO.

The future is looking increasingly uncertain with the Taliban’s suspension of negotiations with the US and plans for Afghans to take on the lead combat role next year, yet the survey shows there is widespread support for the national peace process (with an overwhelming 90 per cent hopeful that it could be successful).

The support is not, however, unconditional and the survey shows much more needs to be done by the government and international community to convince the Afghan people it will ultimately lead to a lasting peace.

In fact, 40 per cent fear it could result in a loss of rights instead; and this fear is particularly acute for women in insecure provinces. In Marjah district, Helmand province, 90 per cent of women had concerns over a potential loss of rights. Values seen as under threat included women’s equality, freedom of expression and democracy.

Managing Director of PTRO Mirwais Wardak says: “Afghans are united in their desire to see a just end to the conflict that they have suffered through for three decades. In many cases, they are willing to make compromises to achieve it, including offering amnesty to former insurgents and negotiated changes to the constitution - so long as this does not result in a loss of rights.

“But whilst they are hopeful for the future, many feel excluded from the process. This must change. Ordinary Afghans must be at the heart of the process. This is our country – if we are not all part of it, there is no future for peace. Our voices must be heard.” 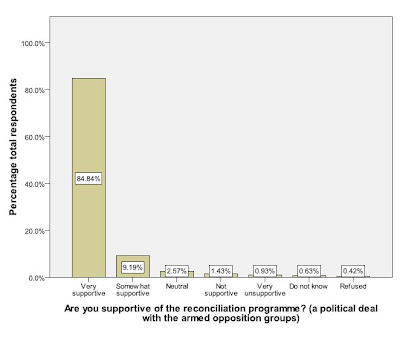 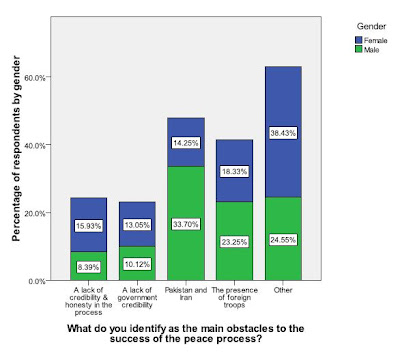 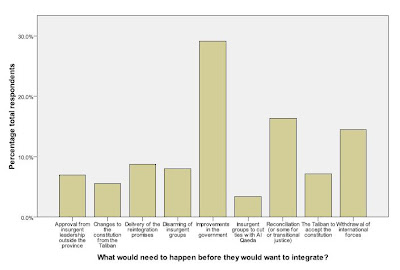 "In spite of the very real obstacles to peace, Afghans are exceptionally hopeful for a future without conflict. This is a view shared irrespective of ethnicity, location, security situation and gender.

A clear majority of respondents (84%) supported the government’s preconditions for the Taliban – that they stop fighting, sever ties with Al Qaeda, and support the constitution. A significant majority (59%) supported the Taliban demand for the withdrawal of foreign forces.

Despite this overall support for the process, divisions were evident over exactly how peace should be achieved, and differences in the approach and detail of the APRP were apparent between ethnicities, genders, and geographic locations. Simply put, the majority of respondents wanted peace, but were divided on how to go about it, and significant differences remain in attitudes towards the prescribed APRP structures.

Many people see the obstacles to the peace process as external to the country, whereas solutions are more readily identified as internal. Locally, specific conditions in localities such as Marjah and Qadis, in Helmand and Badghis, showed distinct perspectives on questions related to Taliban demands and government strength respectively.

While respondents are overwhelming supportive of a political settlement, 40% of all respondents fear that it will result in a loss of rights. These fears were more acute for women, and while overall they were only marginally more fearful, in some insecure provinces (Helmand, Jawzjan, Kunduz, Nagarhar and Paktia) the proportion of women with this fear was approaching double the proportion of men. The most extreme case was in Marjah district, where 90% of women feared a loss of rights.

The major obstacles to the process were consistently identified, and two thirds of all respondents identified either Pakistan or Iran as the biggest spoilers. These results differed slightly between ethnicities and regions: Hazara respondents more readily identify the Taliban as spoilers, in the east of the country more accuse Pakistan, and in the west, Iran.

The suspicion of “foreigners” also includes the International forces, but although they are seem as a significant obstacle to the peace process, they are at the same time recognised as playing a crucial stabilising role.

Improvements in the government were seen as critical to the success of the process, with 27% stating that it would be a prerequisite for the reintegration of armed groups. Furthermore, a significant proportion of respondents (20% altogether) identified the lack of credibility of both the government and the process itself as major problems.

Communication of every element of the APRP appeared to be lacking, demonstrated by the absence of a clear understanding of the process, particularly in isolated communities. This allows hearsay and rumour to take a much more prominent role, and threatens the credibility of the programme and the institutions involved.

The majority of respondents reported that solutions to the myriad problems associated with the APRP should involve the extensive engagement of local trusted social actors. Religious leaders were most often cited as a credible group to be responsible for leading the peace process. While many respondents believed that the high peace council was the correct body to lead the process they also had strong reservations about the membership structure."

Tags: Transitional Justice, Reconciliation
Posted by Peter at 9:41 AM