Central Asia and Afghanistan: Insulation on the Silk Road, Between Eurasia and the Heart of Asia | PRIO 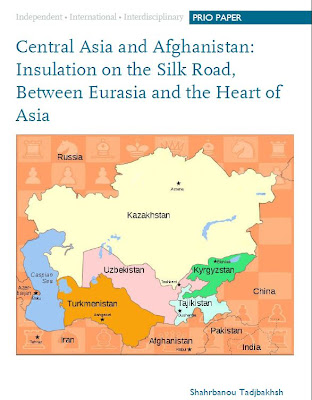 The Peace Research Institute Oslo (PRIO) has just released the latest paper in their fascinating series Afghanistan in a neighborhood. The goal of the project is to explore the wider implications of the wars in Afghanistan by looking at root causes, regional implications and paths towards peace and security.

Two papers have already been published, one laying out a general overview and conceptualisation and a second on South Asia and Afghanistan. A fourth will be published on the Persian Gulf.

The third paper, by Shahrbanou Tadjbakhsh, is entitled Central Asia and Afghanistan: Insulation on the Silk Road, Between Eurasia and the Heart of Asia.

She draws energy and history into the paper by quoting a poem by Muhammad Iqbal Lahori (1877–1938), leader of the All-India Muslim League.

“Asia is a body of water and soil, where the Afghan nation is the heart; its prosperity brings prosperity to Asia, and its decay brings decay to Asia.”

“Is Afghanistan the heart of Asia, from where regional security can be threatened and cooperation induced? Or is it an artificial heart whose beat does not echo the genuine security interests of neighbouring countries? This question is the essence of the PRIO research project ‘Afghanistan in a Neighbourhood Perspective’, which this third paper in the series aims to answer from the point of view of the Central Asian Regional Security Complex (CA RSC).”

“By the end of the Bush administration, a ‘regional approach’ was commonly viewed as a necessary step toward a durable solution to peace in Afghanistan, with the assumption that neighbouring states would benefit from cooperation given the challenge of non-state actors’ destructive behaviour in the wider region. Because of the presence of al Qaeda and the Taliban in Pakistan, and the influence that Pakistan had on internal dynamics within Afghanistan, the ‘regional approach’ first translated into an AfPak strategy within the US policy circles, formally inaugurated in the administration’s March 2009 review. Focus on Pakistan continued with the new President Obama’s AfPak strategy, which set as its goal the defeat of terrorists and insurgencies through counter-insurgency and counter-terrorism. Within this logic, which assumed that change could only come about through the curbing of support for Taliban and insurgents, the Central Asian republics, Russia and other more distant neighbours such as Turkey and Saudi Arabia were seen as secondary actors because they were assumed to have less influence on the internal Afghan power balance. These countries came into the Afghan equation only to the extent that they could support or inhibit US efforts to eliminate al Qaeda and its affiliates, provide logistical support for the US and NATO operations in Afghanistan, or facilitate talks with the Taliban.

By November 2011, it had become clear that limiting the regional approach to Pakistan was not enough. Other countries such as Iran, Russia, India, China, the CA republics, Saudi Arabia and Turkey also had strong stake in the stabilization of Afghanistan. A new concept had to be coined to widen the AfPak strategy and cast a wider net for involving a larger array of states. Thus was born the idea that Afghanistan represents the ‘Heart of Asia’, borrowed from the poem of poet and philosopher Muhammad Iqbal Lahori (1877–1938), leader of the All-India Muslim League and fundamental in the creation of modern Pakistan, but who was also known for his quest for the revival of Islamic civilization, ‘the East’ and Asia. In a poem penned in Farsi, he had claimed that “Asia is a body of water and soil, where the Afghan nation is the heart; its prosperity brings prosperity to Asia, and its decay brings decay to Asia.”

Shahrbanou Tadjbakhsh is a Research Associate with PRIO, and directs a specialization on Human Security as part of the Master of Public Affairs (MPA) at L'Institut d'Etudes Politiques (Sciences Po) in Paris. She is co-author (with Anuradha Chenoy) of Human Security: Concepts and Implications (Routledge, 2007) and Editor of Rethinking the Liberal Peace: External Models and Local Alternatives (Routledge, 2011). She holds a PhD and a Master’s degree from Columbia University.

Afghanistan in a Neighbourhood Perspective: General Overview and Conceptualisation

“For over three decades, Afghanistan has been a battleground in which many of the states of the larger neighbourhood have been involved. The importance of fostering a concerted effort for Afghan peace and stability is increasingly agreed upon. Some analysts emphasize states and their security relationships and see Afghanistan as an ‘insulator’ caught between different regional state systems, each with a strong dynamic of their own. An alternative perspective – which also seems to inform the new US analysis – emphasizes various transnational networks, and sees Afghanistan as the ‘core’ of a larger conflict formation.

This paper takes the former perspective – codified by Barry Buzan and Ole Wæver in the Regional Security Complex approach – as its starting point. It pursues the security dynamics of each of the core regions surrounding Afghanistan (South Asia, the Persian Gulf and South Asia), taking a comparative and historical perspective, with an emphasis on the period since the late 1970s. It concludes that each of Afghanistan’s three surrounding regions is characterized by deep security concerns that have little to do with Afghanistan. These concerns nonetheless inform their engagement in Afghanistan, which comes to reflect conflicts and cleavages specific to the region. One implication is that for Afghanistan, it may be a more promising strategy to seek a unilateral non-offensive or neutral status, rather than security integration with its neighbours. While this would necessitate a forum of Afghanistan’s neighbours in order to foster understanding for the Afghan position, it suggests a dramatic departure from mainstream policy proposals with their emphasis on an integrated regional approach.”

“Is Afghanistan a playground for the India-Pakistan conflict? Or, are the countries in South Asia – Pakistan in particular – the recipients of unrest that spills over from Afghanistan? Alternatively, is the larger neighbourhood, South Asia and Afghanistan included, simply a victim of rivalry between global powers? Views on the relationship between Afghanistan and its neighbouring countries vary widely. The different views have fundamental consequences for how one understands the conflict, and for what policies one finds constructive. Cognizant of the roles of actors in Central Asia and the Persian Gulf region, and excluding neither the importance of Afghan domestic factors nor global forces, this paper emphasizes the way that the India-Pakistan conflict – the overwhelming security issue in the South Asian region – informs the two countries’ engagement in Afghanistan.”