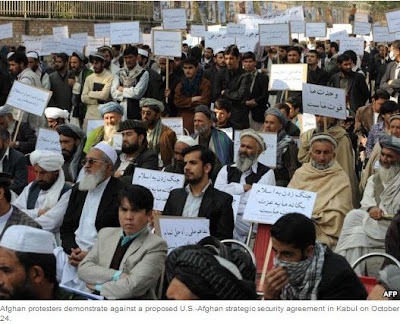 M K Bhadrakumar, a former diplomat from India, breaks down the motives on why the US is seeking to establish a bi-lateral agreement with the government of Afghanistan and abandon the constraints of a UN mandate. The second article, by the Afghan Youth Peace Volunteers with Kathy Kelly, gives an on-the-ground perspective.

“The renewal of the mandate of the ISAF - multinational force leading the campaign in Afghanistan - comes up for renewal in the UN Security Council this week. The ensuing debate can be expected to bring into focus the issues of the proposed ‘transition’ in 2013, the ending of the ‘combat mission’ in 2014 and the post-2014 scenario itself. I am keenly awaiting the Indian statement.

The United States and NATO are hoping to change ships — move out of the UN mandate to a more comfortable bilateral framework with the government in Kabul so that they are not accountable to the UN and can pursue their geo-strategies in the region with impunity. The US and NATO’s expectation is to formalize a long-term military presence in the region. Simultaneously, NATO is also probing the scope for expanding its presence in Central Asia.

But the best-laid plans can go awry in Afghanistan. The present moment is one such, full of imponderables. A new, unexpected and yet compelling factor has surged, which was always there lurking below the surface but the US found it expedient to ignore — Afghan nationalism. After having taken decades of battering and with its economy in shambles, somehow a notion had crept in the Western mind that the Afghans are up for sale to the highest bidder…”

“Currently, citizens of Syria and the world can at least discuss Mr Kofi Annan’s warning that the situation in Syria should be handled “very, very carefully” to avoid an escalation that would de-stabilize the region, after an earlier warning against further militarization of the Syrian crisis. The crisis in Afghanistan is as severe as the one in Syria, and it is more chronic. 2 million Afghans have been killed in the wars of the past 4 decades. But not a single diplomat is warning against the further militarization of the Afghan crisis.

The previous UN Envoy to Afghanistan, Kai Eide, did try. “The most important reason for my bitterness was my ever-growing disagreement with Washington’s strategy in Afghanistan,” Kai Eide writes, in his book Power Struggle over Afghanistan. “It had become increasingly dominated by military strategies, forces, and offensives. Urgent civilian and political requirements were treated as appendices to the military tasks. The UN had never been really involved or consulted by Washington on critical strategy-related questions, nor had even the closest NATO partners. More importantly, Afghan authorities had mostly been spectators to the formation of a strategy aimed at solving the conflict in their own country.

It has taken the killing of 16 civilians in Kandahar for the world to notice the anger that the war has inflamed in the hearts of both U.S. soldiers and Afghan mothers.

Military and foreign policy elites in Washington have encouraged a conventional presumption that the ‘war on terror’ requires a long-term U.S. military presence in Afghanistan. Underlying that presumption is a deeper assumption that ‘terrorism’ can be resolved through war, that is, a supposition that humanity can somehow counter ‘terrorism’ by killing as many ‘terrorists’ as possible, regardless of the deadly anger these killings, so similar in themselves to terrorist acts, must necessarily fuel, not to mention the costly ‘collateral damage.’

Tax-payers from the 50 coalition countries involved in the Afghan war should be alarmed at how and where their money is spent. They should be considering how they would feel were they offered $2000 in compensation for the murder of a child, husband, father or mother, the compensation NATO handed out ‘ex-gratia’ (with no admission of its own wrongdoing) to the families of the 16 children, women and men slaughtered in their sleep on March 11, 2012.

Will the Afghan Parliament, the U.S. public or the UN debate the 10 year U.S. war strategy in Afghanistan?

Will the Afghan Parliament, the U.S. public or the UN debate the U.S. Afghan Strategic Partnership Agreement?...”

The Afghan Youth Peace Volunteers are a grassroots group of multi-ethnic, ordinary Afghans working towards non-military solutions for Afghanistan, based on non-violence, unity, equality and self-reliance. http://ourjourneytosmile.com and http://globaldaysoflistening.org.