Budget For All to End the War in Afghanistan | CPC 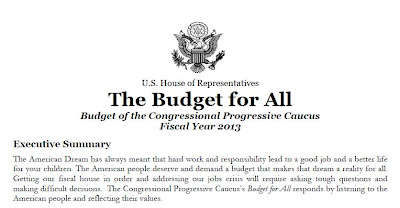 The first step in transforming our engagement into one based on human needs in Afghanistan. It's time to invest in peace. Click above for the link.

“End emergency war funding beginning in FY 2014. The Congressional Progressive Caucus believes that the military’s time in Afghanistan must come to a responsible and expeditious end. The Budget for All maintains Overseas Contingency Operation funding for redeployment in FY 2013, but the funding is zeroed out thereafter, and includes a prohibition on funds being used for any permanent bases in Iraq or Afghanistan. This achieves $1.1 trillion in savings over 10 years.”

Our military engagements overseas are currently being financed on borrowed money, fought on borrowed time, and following a strategy unsuited for modern threats. Defense spending has nearly doubled over the last decade, and this approach has strained our military and economy to the brink. The Budget for All responsibly ends operations in Afghanistan, and puts an end to nation building outside the United States.

With two wars drawing to a close, we need a leaner, more agile force to combat 21st century risks. By employing strategies designed for today’s enemies, the CPC budget maintains a smaller, but still unparalleled, armed forces. The CPC budget reduces baseline military spending to ensure defense spending does not continue to contribute significantly to our current fiscal burden and redirects these funds to priorities such as caring for our veterans and smart diplomacy.

In total, the Budget for All achieves nearly $1.9 trillion in savings by bringing our troops home and realigning the Department of Defense. Our budget invests in foreign diplomacy and international aid to stabilize key regions of the world by smarter, more efficient means.

End emergency war funding beginning in FY 2014. The Congressional Progressive Caucus believes that the military’s time in Afghanistan must come to a responsible and expeditious end. The Budget for All maintains Overseas Contingency Operation funding for redeployment in FY 2013, but the funding is zeroed out thereafter, and includes a prohibition on funds being used for any permanent bases in Iraq or Afghanistan. This achieves $1.1trillion in savings over 10 years.

Reduce base discretionary defense spending. With more than a decade of war coming to a close, every dollar spent at the Department of Defense must be reviewed with renewed vigor. A modern defense strategy must focus our armed forces on their strengths of crisis response, defense, and deterrence. Our military needs to adapt to current threats and challenges, particularly on nuclear proliferation and terrorism. The threat of terrorist attacks could be effectively dealt with through cost-effective deployment of Intelligence and Special Operations, while eliminating failed strategies.

To suit the newly formed strategy, the Budget for All gradually achieves a smaller force structure with fewer personnel through attrition. Further, no savings are obtained by reducing military personnel wages or benefits, including TRICARE and pensions. The proportion of private contractor personnel would be significantly reduced, curbing needless “outsourcing” that creates excessive cost overruns. The contraction in force structure would also reduce expensive modernization requirements, especially for older or unnecessary platforms such as the Trident II nuclear missile, F-35, V-22 Osprey and field alternatives, and the Virginia-class submarine, which are ill-suited to handle current threats. Further, the CPC budget limits the modernization of Cold War-era nuclear weapons and infrastructure, as outlined by the Smarter Approach to Nuclear Expenditures (SANE) Act. In contrast, this budget supports the retention of current Special Operations Forces and their capacities for operations."

You can see the whole budget here.
Click here for the web page of the Congressional Progressive Caucus
Posted by Peter at 12:46 PM