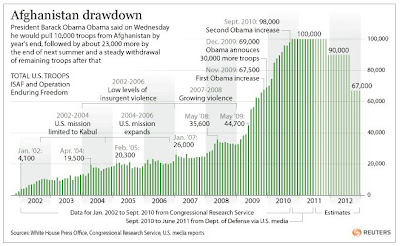 Over the weekend a US Soldier burst into several Afghan homes killing 16. Nine of the dead are children and it appears the bodies were set on fire. Extensive coverage from AP, NYT, and Reuters for details.

There are currently over 90,000 US troops, 40,000 other foreign forces, and 133,866 private contractors working with the U.S. military in Afghanistan. These figures also do not account for U.S. Special Forces, the CIA, CIA trained Afghan forces, US armed militias or the Afghan Local Police.

The U.S. NATO strategy has been to create and train a standing army of 240,000 soldiers with the addition of 160,000 police. Theoretically, these forces will facilitate the removal of combat forces when the NATO mission ends in 2014 to be replaced by a US-Afghan strategic partnership that will allow the U.S. to continue its military presence through the search and destroy tactics of the special forces. See Ann Jones here.

"We feel that, surely, governments need to resolve this conflict through diplomacy and move away from the failed military strategy that has resulted in all that we are witnessing today," says the Kabul-based peace activist who goes is the coordinator for Afghan Youth Peace Volunteers.


Juan Cole puts it in a broader historical context.

“In the history of anti-colonial struggles (which is how the anti-US forces in Afghanistan and Pakistan see the war), almost accidental minor incidents frequently became rallying cry.”

Afghans to US Military: Be at Least a Little Ashamed

This is one Afghanistan newspaper’s reaction today to the story of the massacre by a US staff sergeant of 16 villagers, including 9 children, near Qandahar. It is a medley of photographs of US troops in the country. Note that the source, Afghanpaper.com, in Dari Persian, is considered an “independent” news source by the US government; it is not a Taliban operation, and has usually been balanced. The headline is, “Let us be at least a little bit ashamed.”

The fairness or unfairness of the contextless collage below is irrelevant to its emotional impact on Afghans whose sense of national sovereignty is being injured by the more-than-a-decade US occupation of their country. Going into homes where there are unveiled women, and exposing them to the gaze of 18 year old strange American men, is always going to anger Afghans. I’ve had US government people almost shout at me that such considerations cannot be allowed to come into play when you are doing counter-terrorism, that the chief thing is to find the weapons caches. But this kind of thing is why the Iraqi parliament voted the US troops right out of their country as soon as they could, and if the Afghan parliament had any real power, it would, too (some parliamentarians have already called for a jihad against the US over the Qur’an burning fiasco).

The Qur’an-burning scandal and this soldier going berserk are in many ways tangential to the Afghanistan War, but this does not mean they are unimportant. In the history of anti-colonial struggles (which is how the anti-US forces in Afghanistan and Pakistan see the war), almost accidental minor incidents frequently became rallying cry. The Dinshaway incident in Egypt in 1906 is a famous example. Some 13 years later there were hundreds of thousands of Egyptians in the streets demanding a British departure, which was achieved in 1922.

The US is hoping to be mostly out of Afghanistan by the end of 2013. But there is a plan for special forces to remain in the long term. The Peshawar-based Frontier Post calls this plan a “wild goose chase” for the US, and says it almost certainly doomed to failure.

Afghans for Peace are organizing vigils around the world.
Posted by Peter at 11:13 AM