Why do we Always Find Prisons the Solution? 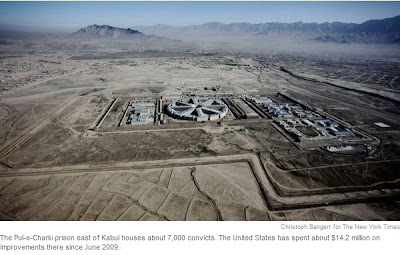 One of the most pitched battles over sovereignty and authority has been the demand that the US turn over their prison systems in Afghanistan. While details appear to have been reached regarding the largest US-run prison, there remain informal detention centers across the country.

The NYT’s has an article on invasive body searches of women seeking to visit loved ones at the largest Afghan-run prison.

"Since June 2009, the United States has earmarked $26.8 million for renovations at the prison, and just over half of that has already been spent."

Radio Free Europe drew attention earlier in the week to a hunger strike at the same prison.

"In the past decade, inmates have alleged widespread abuse and mistreatment at the hands of Afghan officials. Those allegations of prisoner mistreatment resurfaced this week after prison officials at Pul-e Charkhi confirmed that at least 100 inmates had gone on hunger strike and sewed their lips together in protest at what they say are inhumane conditions."

Ambitious Afghan Biometric ID Plan
Posted by Peter at 10:25 AM