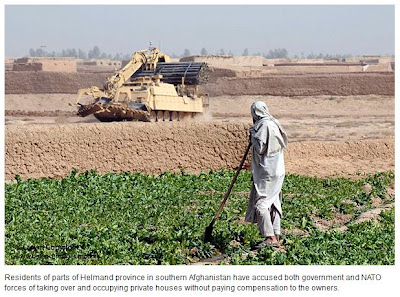 The Institute for War and Peace Reporting looks at the resentment brewing in Helmand province over the seizure of land and homes by Afghan and International Forces. Unlike night raids and other sensational abuses that receive media attention these actions ignite a slow burn. It’s what occupation looks like.

“Officials in Helmand province acknowledged there was a problem, although not all agreed on the scale of the home occupations or whether compensation was paid.

Helmand governor Mohammad Gulab Mangal said that he was aware of the issue and confirmed that both government units and NATO’s International Security Assistance Force, ISAF, made use of private property, including houses and farmlands.

“I have repeatedly told our police and army commanders to avoid damaging private property when they enter these areas, but there have been a number of cases where Afghan and ISAF forces have taken over and used people’s properties…”

Last year the US military commissioned a study on attitudes between US and Afghan soldiers. It reported that Afghan soldiers described their American comrades as rude, disrespectful and reckless with gunfire when civilians were nearby, while US troops saw Afghan personnel as traitorous, lazy, drug-addled and corrupt. It highlighted the deep divisions. A copy of the report is linked below.

In January the NYT’s ran excerpts of the report.

"The 70-page coalition report, titled “A Crisis of Trust and Cultural Incompatibility,” — which was originally distributed as an unclassified document and later changed to classified — goes far beyond anecdotes. It was conducted by a behavioral scientist who surveyed 613 Afghan soldiers and police officers, 215 American soldiers and 30 Afghan interpreters who worked for the Americans.
While the report focused on three areas of eastern Afghanistan, many of the Afghan soldiers interviewed had served elsewhere in Afghanistan and the author believed that they constituted a sample representative of the entire country.

“There are pervasive feelings of animosity and distrust A.N.S.F. personnel have towards U.S. forces,” the report said, using military’s abbreviation for Afghan security forces. The list of Afghan complaints against the Americans ran the gamut from the killing of civilians to urinating in public and cursing.

“U.S. soldiers don’t listen, they are too arrogant,” said one of the Afghan soldiers surveyed, according to the report. “They get upset due to their casualties, so they take it out on civilians during their searches,” said another.

The Americans were equally as scathing. “U.S. soldiers’ perceptions of A.N.A. members were extremely negative across categories,” the report found, using the initials for the Afghan National Army. Those categories included “trustworthiness on patrol,” “honesty and integrity,” and “drug abuse.” The Americans also voiced suspicions about the Afghans being in league with the Taliban, a problem well documented among the Afghan police.

“They are stoned all the time; some even while on patrol with us,” one soldier was quoted as saying. Another said, “They are pretty much gutless in combat; we do most of the fighting.”

A copy of the full report here.