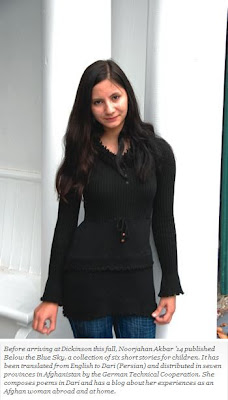 Noorjahan Akbar is a co-founder of Young Women for Change, an inspiring organization that works for gender equality in Afghanistan.

She has just been chosen as one of the recipients of the 2012 Women of Distinction Award by the National Conference for College Women Student Leaders.

"Born in Kabul, Afghanistan, in 1991, Noorjahan Akbar has had the rare opportunity of receiving an education, something not available to the majority of women in Afghanistan. She earned scholarships to attend two years of high school at the George School in Pennsylvania, and she is currently a sophomore at Dickinson College.

Akbar learned English and computer skills when her family moved to Peshawar, Pakistan, after the Taliban entered Afghanistan. In 2001, her family returned to Afghanistan and started an English-language center for about 400 women in the Qala-e-Fatullah region of Kabul.

At a very early age, Akbar started working with Radio Azadi (Radio Free Europe) as a writer for children’s programs. In the ensuing years, she worked as a writer and a translator at several organizations. Through her job at a German education program, she worked with children to write a book of six short stories for kids. The collection, which was printed and distributed in Afghanistan, inspired Voices for Hope, an effort focused on teaching children to write and think creatively. She later designed a program called Stories to Heal, which worked with 100 Afghan orphans on creative writing projects.

In summer 2011, Akbar co-founded Young Women for Change, an organization of volunteers who work for gender equality in Afghanistan. Since then, YWC has gained nonprofit status, formed a male advocacy group, organized monthly lectures on gender and women’s studies, collected books to build libraries in Kabul and Helmand, and began conducting research on street harassment in Kabul, thanks to a new grant." 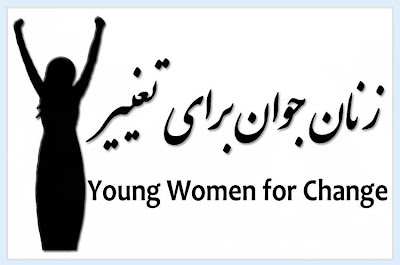 Here is a link to their active facebook page.

Here is a previous story.

She published this article in the March 2011 issue of Friends Journal about a project to gather and record traditional Afghan music.

Here is a profile of her work at Dickinson College.
Posted by Peter at 7:21 AM