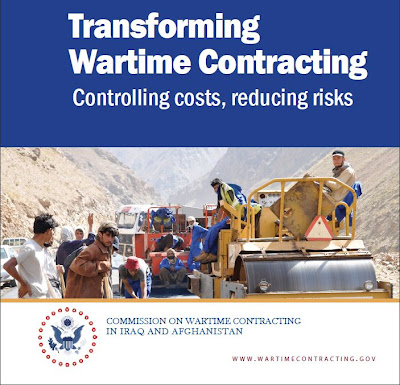 Yesterday the Commission on Wartime Contracting in Iraq and Afghanistan issued their final report. It is the most authoritative resource to date on the role contractors have played in the war and the lack of oversight and accountability by the US Government.

It is a huge document, well researched and frank. They also have an extensive webpage with previous reports, testimonies from hearings, and extensive links to government agencies. While the commission will be disbanded at the end of September the webpage will continue to be available as a static resource.

This sobering, but conservative, estimate flows from nearly three years’ work by the Commission on Wartime Contracting in Iraq and Afghanistan, an independent and bipartisan panel created by Congress in 2008 to examine waste, fraud, abuse, accountability, and other issues in contingency contracting, and to make recommendations for improvement.

Spending on contracts and grants performed in Iraq and Afghanistan in support of operations in those countries is expected to exceed $206 billion through the end of fiscal year (FY) 2011. The money goes to two categories of activities: first, support of U.S. operations, such as logistics; and second, direct execution of programs like training host-country military and police forces. Construction projects fall into both categories. Contracts are awarded and managed in various locations—in country, in other countries in the region, and at various buying commands in the United States.

The number of Department of Defense (Defense), Department of State (State), and the U.S. Agency for International Development (USAID) contractor employees in Iraq and Afghanistan has varied, but exceeded 260,000 in 2010. The contractor-employee count has at times surpassed the number of U.S. military personnel in the two countries. Most contractor employees are third-country nationals and local nationals; U.S. nationals totaled more than 46,000, a minority of those employed.

Nathan Hodge writing in today’s Wall Street Journal links the work of the commission to the super committee.

Mr. Shays added that it would be a "failure" if a special congressional committee charged with finding at least $1.2 trillion in deficit reduction over the next decade didn't consider the panel's findings.