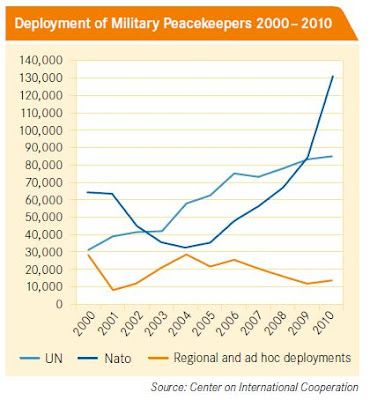 In February 2011, United Nations Secretary-General Ban Ki-moon told an audience at Oxford University that, with 120,000 uniformed and civilian peacekeepers worldwide, “we are now considering what the optimal size of UN peacekeeping should be.” But peace operations are rarely shaped by objective considerations. UN and non-UN missions are plagued by contradictory pressures. From Haiti to Sudan, there are compelling arguments for maintaining large peacekeeping forces for the long term. But there are equally powerful financial and political reasons to cut them back.


There is no shortage of policy papers offering technical recommendations about how to reform peacekeeping. This paper takes a different approach, setting out five paradoxes that currently trouble officials dealing with peacekeeping at the UN, in governments and in organizations such as NATO, the European Union (EU) and the African Union (AU). The evolution of peacekeeping will depend on how policy-makers respond to these dilemmas.

Military peacekeeping has grown in scale … yet lost operational impact.

Peacekeeping is cheap … but it is also still too expensive.

All peace operations are political … but not all are guided by credible political strategies and few peacekeepers are good at politics.

Emerging non-Western powers play a major role in peacekeeping … but may not want it.
Posted by Peter at 6:46 AM