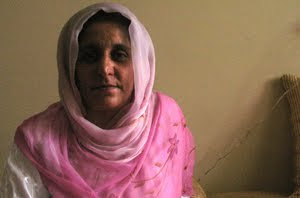 "At the time of the 9/11 attacks, I was living as a refugee in Pakistan, where I held different jobs: as a teacher, as an activist, then as an editor for one of the local papers in Peshawar.

The night before 9/11, I dreamt that a big change was on the way. In my dream, I saw Afghanistan as a large building with UN and other flags around it. I can't recall the exact details now. But when we heard about the attacks in New York and later that there would be war launched in Afghanistan, I told my dream to my family. No one would believe me.

We did not consider the US intervention as illegitimate. For years, war and oppression had worn people out. We saw it as a window of hope that would bring fresh political air into the country.

A year after the US intervention, my husband went to Khost province to get a job as a university professor and I went a long with him. I was offered the job as the provincial head of woman affairs. I started at the post three days after I had given birth to my child. Unlike other women, I did not wear the burqa. People thought I was either crazy, or a foreigner.

No such office [Directorate for Women's Affairs] existed there before, so the first space that we were given was almost like a barn where animals had been kept. We started from scratch, by repainting the place and building a vibrant office out of nothing.

The struggle was that the women did not want to take the risk of working with me. I had to find ways of encouraging them. One such way was to hire their husbands as drivers or cooks and such, and then convince them to bring their wives to work with them.

But things got better, and we expanded our activities outside the provincial capital.

At the end of the first Karzai term, I remember visiting a mosque in one of the villages. Over 250 women gathered there. In those days, we did not even carry bodyguards and weapons during those visits.

But last year, when I returned to campaign for re-election, I had to go under cover. I switched houses every night, and I could not manage to hold even one public rally.

During the past decade, we have definitely made progress in certain areas—the fact that we have a constitution, a system of governance, freedom of the press, the number of children going to school etc. But security has deteriorated in many areas and remains a big concern.

We have not made the best use of the opportunity provided to us. People are discontent with the central government— people have been distanced. And the foreigners, too, have made big mistakes. They barged into people's homes in the middle of the night, and dragged them out without giving them an opportunity to put their shirt on. I remember visiting my constituents held by intelligence agencies who only had their under shirt on. One of them had only one sandal on and wasn't even given the chance to find the second. Such things leave a mark on the Afghan people.

Undoubtedly, the foreigners have made sacrifices here— both in terms of lives, but also financially. But they have also made big mistakes and have been weak in their coordination."

* Today (9 September) is also significant. Marking ten years since the assassination of Mujahedeen leader Ahmad Shah Massoud by al-Qaida suicide bombers posing as journalists. He fought Soviet troops and their allies in the 1980s and led the Northern Alliance against the Taliban in the 1990s.
Posted by Peter at 8:59 AM