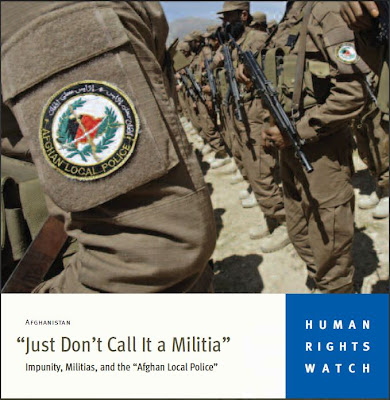 Human Rights Watch issued a report today looking at the proliferation of militia forces in Afghanistan. The report finds the U.S.-backed initiative to create the Afghan Local Police (ALP) "a high-risk strategy to achieve short-term goals in which local groups are again being armed without adequate oversight or accountability."

Just Don’t Call It a Militia: Impunity, Militias and the Afghan Local Police

(Kabul) – Militias and some units of the new US-backed Afghan Local Police are committing serious human rights abuses, but the government is not providing proper oversight or holding them accountable, Human Rights Watch said in a report released today. The Afghan government and the US should sever ties with irregular armed groups and take immediate steps to create properly trained and vetted security forces that are held accountable for their actions.

“The Afghan government has responded to the insurgency by reactivating militias that threaten the lives of ordinary Afghans” said Brad Adams, Asia director at Human Rights Watch. “Kabul and Washington need to make a clean break from supporting abusive and destabilizing militias to have any hope of a viable, long-term security strategy."

Click here for the full report.
Posted by Peter at 11:31 AM