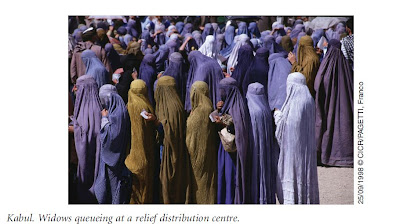 A minibus returning from a wedding in the western province of Herat hit a roadside bomb Tuesday, triggering an explosion that killed 16 people from the same family. 11 were children and four were women.

The escalating violence in the country compelled the International Committee of the Red Cross/Red Crescent societies (ICRC) to open a seventh orthopaedic centre in Helmand province last October.

Alberto Cairo who has been head of the orthopaedic program in Afghanistan since 1992 selected pictures from the organizations photo archive for this report, covering 30 years of service in the country. The scale is stunning.

Also, check out the new blog by the ICRC.

“The ICRC mandate, in a nutshell is: to protect the lives and dignity of victims of war and internal violence and to provide them with assistance; to prevent suffering by promoting and strengthening humanitarian law and universal humanitarian principles; to coordinate the relief activities of the Red Cross and Red Crescent Movement in situations of conflict.”

The ICRC has been present in Afghanistan since 1979, working initially out of Pakistan, and since 1987 from its delegation in Kabul. The institution has over 130 expatriates and more than 1,400 national staff based in Kabul and in fourteen other locations throughout the country.

The ICRC regularly visits places of detention run by nations contributing to the NATO-led International Security Assistance Force (ISAF), by the US forces, and by the Afghan authorities. The aim is to monitor conditions of detention and the treatment of detainees. In 2010, it also began visiting people detained by the armed opposition. Moreover, it helps families who are separated by the conflict to stay in touch with one another through Red Cross messages and telephone calls, and endeavours to trace those family members who have gone missing.
Posted by Peter at 2:11 PM