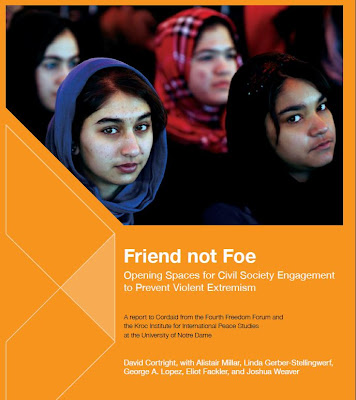 “One of the less known effects of the tragic 9/11 events and the subsequent global war on terror is the chilling impact counterterrorism measures have had on civil society and citizens’ agency. Ten years later the phrase ‘war on terror’ is no longer used officially, but measures that curtail the operational and political freedoms of civic organizations worldwide in the name of countering terrorism continue to be real, tangible, and strongly counterproductive. Through their efforts for development, human rights, peacebuilding, and conflict transformation civil society groups address political grievances, socio-economic injustices, and power imbalances that are among the root causes of violent armed conflict. Understandably these groups do not want to label their work as counterterrorism, but it is exactly what is needed to counter violent extremism.”


The report has a chapter on money as a weapons system.

“The development aid that is provided in Afghanistan and other war zones is not for the purpose of alleviating poverty and supporting long-term sustainability. Its strategic objective is to gain the sympathy of local populations and win political support for military missions. Aid programs from the U.S. and other NATO countries generally flow to regions and communities where military and counterterrorism operations are taking place. In Afghanistan funding is concentrated in southern provinces where insurgency and counterinsurgency are most prevalent, while other previously less turbulent parts of the country receive fewer development resources. U.S. military leaders are explicit in describing development assistance as an element of war. A U.S. Army manual for Iraq and Afghanistan was entitled “A Commander’s Guide to Money as a Weapons System.” It described aid as “a nonlethal weapon” utilized to “win the hearts and minds of the indigenous population to facilitate defeating the insurgents.”