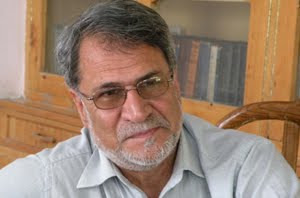 "I was in Dushanbe, Tajikistan, as the spokesman for the United Front [anti-Taliban resistance] when the attacks happened. It was 2am that the defence attaché at our embassy called me and asked me to turn on the TV, which was showing the pictures live.

We had kept the news of Ahmad Shah Massoud's death away from the press for two days because we thought everything was over with his death. The resistance would be crushed right away.

We knew that Taliban, al-Qaeda, and the Pakistanis on the otherside of the Kokcha river would cross and end it all for us if they learned of Massoud's death. So September 11 was a relief for us—such a relief that I did not sleep from happiness all night. It was as if a knife placed on my throat had been lifted.

I knew right away that the world would break its silence on Afghanistan and blame al-Qaeda on the attacks because of previous experience. When the attacks on Tanzinia and Kenya happened, I was in hospital in Germany. I watched pictures of Osama all over the TV screen from my hospital bed and there was tremendous international condemnation.

I think the initial contact made with the United Front was 42 days after the attacks of 9/11, through the US embassy in Uzbekistan. They informed us that they wanted to see [Qasim] Fahim [who replaced Massoud as the resistance leader] urgently. This was the beginning of the contacts, before the US military operations began.

Subsequently, I think the wrong system was put in place here. I have always had issue with this centralised system because it gives the authority to one person, which then translates to the authority of one tribe. Karzai, for example, did not emerge based on his merits, but rather through the recommendation of one tribe. Centralised power is problematic. Authority needs to be distributed, shared. There needs to be a prime minister that is accountable to the parliament.

There is no question progress has been made in the past ten years. Before then, if a king died, his son would take power. Now, we have a constitution that says the country's leader needs to be elected by the people. This is the result of long years of struggle.

But if the international forces leave today, I think all this will falter within a week. Nothing has been institutionalised. People lack trust in these structures, because governments actions have made them question everything from elections to the parliament. Our security forces are not strong enough to cope with the enemy at a time when the threat remains the same threat of ten years ago. The situation is not much different from when the Soviets were about to withdraw. A similar vacuum would be left."

* Today (9 September) is also significant. Marking ten years since the assassination of Mujahedeen leader Ahmad Shah Massoud by al-Qaida suicide bombers posing as journalists. He fought Soviet troops and their allies in the 1980s and led the Northern Alliance against the Taliban in the 1990s.
Posted by Peter at 9:58 AM