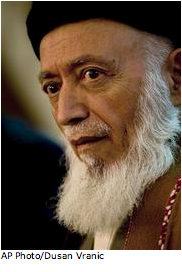 Burhanuddin Rabbani was a founder and leading activist in the Afghan Islamist movement in the 1960s and 1970s, one of the seven leaders of the (Sunni) mujahedin parties in the 1980s and – at least formally – president for almost a decade.

More recently, he has been an MP and chairman of the High Peace Council, charged with seeking to make peace with the Taleban.

Rabbani was killed in his Kabul home Tuesday evening by a suicide attacker.

Kate Clark, a senior analyst for the Afghan Analyst Network assesses Rabbani’s life and what his death may mean for the prospects of peace.

“Although many of the media reports referred to him as the lead peace negotiator, Rabbani’s record hardly merited the description of a ‘peace-maker’. Indeed, in relation to his most recent incarnation, many Afghans and observers remained sceptical of the High Peace Council and Rabbani’s role in it, questioning whether it was really set up as a serious body or something more cosmetic – designed to give the appearance that the government was seeking peace. Such scepticism, however, seems irrelevant this evening. Whether or not Rabbani and the High Peace Council were serious about making peace, if the Taleban claim this killing, it sends a powerful message that they are not interested in talking. This would make Rabbani’s assassination highly significant and dangerous for the prospects of an end to the war in Afghanistan.

The killing is poisonous in other ways, laying open again the fracture lines of the last real bout of civil war (1996-2001) when the ‘northerners’ – the old Northern Alliance, who were mainly non-Pashtuns - were fighting the largely Pashtun Taleban. Putting Rabbani in charge of the High Peace Council had been a way for President Karzai to try to reassure this constituency, who are on the whole not keen on a deal with the Taleban, that their interests would not be sold out in any negotiations.

For these northern jihadi leaders, already reeling from the killings of Generals Daud and Seyidkheili earlier this year, Rabbani’s assassination is a further blow to any confidence they might still have had that their interests would be protected. His killing will further harden sentiments against any deal making. Already one of the other major northern leaders, the governor of Balkh and Jamiat stalwart, Nur Muhammad Atta, has asked (on Tolo television), ‘How are we supposed to negotiate with these wild devils?’ Rabbani may not have been a peace-maker, but his killing may well harm the prospects for a negotiated end to the bloodshed.

The attack also ends the life of one of the major Afghan political figures of the late twentieth and early twenty-first centuries.

Rabbani’s beliefs eventually – and only through various historic accidents – helped shape the nation’s politics. Perhaps the most significant influence on his beliefs came when he travelled to Cairo in the late 1960s to study at the prestigious al-Azhar University. He returned a convert to the ideas of the Egyptian Muslim Brotherhood (Ikhwan ul-Muslimin), determined to spread their ideology at home.* During the 1970s, he was an Islamist activist at that cauldron of ‘modern’ Afghan politics, Kabul University, where he taught Islamic law. He hooked up with more senior ‘Brotherhood’ figures whose names are now not so well known,** as well as with students who would, like him, become giants of the Afghan political stage in the following decade, particularly Ahmad Shah Massud and Gulbadin Hekmatyar."

Read the full article.
See this post for a listing of recent attacks in Kabul.
Posted by Peter at 2:03 PM