Our Man in Kandahar | Matthieu Aikins 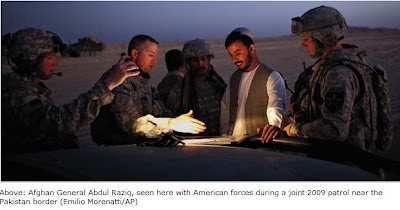 Matthies Aikins has a long expose in The Atlantic magazine about Afghan General Abdul Raziq. It will haunt you.

The 5,000-word investigation is the result of multiple trips to the country over two years. It tells the story of an ongoing series of serious human rights abuses--including a cold-blooded massacre and the torture of prisoners--by General Abdul Raziq, a powerful warlord in Kandahar Province, southern Afghanistan.

More than an anatomy of a massacre, the article is a condemnation of the US policy to support Afghan warlords as a shortcut to security. It’s a big-picture-policy debate that put the US at odds with NATO allies during the early years of the war. It continues to be a difference in strategy.

Fundamentally it is a policy the majority of Afghans abhor.

You see it through their rejection of the Afghan Local Police scheme – where local communities (militias) are armed and funded by the United States and you see it with continuing calls from civil society groups in Afghanistan for more accountability and transparency from the Government.

Disturbingly, the US government has been aware of these abuses for at least five years, but has continued to support him and his force with funding and training. In violation of the Leahy Amendment of 1997.

The law prohibits State Department or Defense Department assistance or training to a foreign military unit where there is ‘credible evidence that such unit has committed gross violations of human rights.’

People should be held accountable.

There is a back story. The story of how a young man rose from working in a shop in Pakistan pre-2001 to become a critical US ally and acting police chief in Kandahar, Afghanistan’s second largest city.
Posted by Peter at 9:54 AM