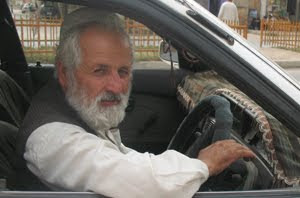 "At the time of 9/11, I was living in a refugee camp in Pakistan. I lived there for 20 years. I first lived in Parachinar, but I lost a son in the sectarian tensions, so I moved out to a camp.

I remember watching the flames in the New York buildings on TV. I also remember the threats that were given to the Taliban by the American government to pressure them to give up Osama.

The US invaded because of its own goals. This country has vast minerals, that's what they want. If they did not have their eye on that, they would have figured out a deal with the Taliban to get Osama. You have to remember that Taliban were their people as well.

When the Karzai government came to power, I brought my family back into the country and have been living in Kabul ever since.

Life has gotten much better in the past few years, we have definitely seen positive economic change. We were refugees for so many years, and we could come back to our homes and make a living here. Yes, there is a lot of corruption, but at least there is a government and a system. In some areas, security is really bad. But in general, life has gotten better."

* Today (9 September) is also significant. Marking ten years since the assassination of Mujahedeen leader Ahmad Shah Massoud by al-Qaida suicide bombers posing as journalists. He fought Soviet troops and their allies in the 1980s and led the Northern Alliance against the Taliban in the 1990s.
Posted by Peter at 10:28 AM