Attacks on US Embassy in Kabul | Fear and Panic 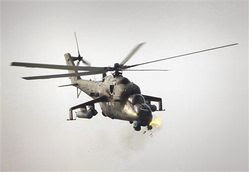 An Afghan military helicopter fires on a building occupied by 'insurgents' during a coordinated assault in Kabul. Insurgents fired rocket-propelled grenades and assault rifles at the U.S. Embassy and NATO headquarters while suicide bombers struck police buildings. (AP/Musadeq Sadeq)

Jack Healy and Alissa J. Rubin had a couple of articles this week on the coordinated attacks in Kabul. In addition to following the US governments position on those responsible, I noticed they used these quotes a couple of times. Highlighting the different ways Afghans and foreigners see the violence.

The residents of Kabul are mad and afraid, the US Ambassador down-played the violence saying it is a sign of weakness and the new US NATO commander revealed who was responsible and their motives.

“We are mad at both,” said Farid Hotak. “At the Taliban for doing these types of attacks, and at the government for failing to prevent them.” Mr. Hotak, who lives in an apartment across the street, seethed at the memory of girls crying and running for cover. “Fear and panic rules,” he said. - Afghan Resident of Kabul

Ryan C. Crocker, played down the attack as “harassment” that had made for a hard day at the embassy but was not a game-changer. “This really is not a very big deal,” Mr. Crocker said. “If that’s the best they can do, you know, I think it’s actually a statement of their weakness.” - US Ambassador

A more detailed account of the day is provided by Fabrizio Foschini, focusing more on the Afghan targets that were hit and the impact it had on the residents. The timeline from Associated Press affirms increasing levels of violence in the city.

Another Longest Day in Kabul

“The objective of the attacks seems clear. The two explosions in West Kabul targeted the Afghan Border Police (ABP) headquarters in Deh Mazang and Afghan National Police (ANP) 202 Shamshad corps headquarters on Darulaman road, near Lycee Habibia. Some police casualties were reported for both attacks, which were apparently suicide bombings (one ANP and two ABP respectively, plus an unknown number of injured civilians and servicemen). As for the complex attack that lasted for most of the afternoon and into the evening, its real dynamics and details are still all but clear. The ultimate target of the commando could have been any (or all) of the locations mentioned in the Taleban statement, that said its fighters ‘attacked the NATO’s ISAF HQ, US embassy and local and foreign intelligence agencies’. At least three rockets are said to have hit close to the US embassy compound, while at least one (unconfirmed) report points at insurgent attempts to breach the embassy's outer security perimeter from different points (this matches other equally unconfirmed reports of more insurgents moving in the area, apart from those barricaded in the building under construction).

Be as it is, a Taleban attack inside Kabul in itself did not come as a big surprise, although its intensity and scope was unexpected. According to a generally accepted interpretation, the pattern of insurgent attacks inside Kabul has reached a frequency of around one attack in every three weeks. Special occasions or events can further add to this number. The present situation, with the anniversaries of last week, accounted for both eventualities, and many were waiting in trepidation for something to happen.”

—July 17: Gunmen strapped with explosives kill a close adviser to President Hamid Karzai and a member of parliament. Jan Mohammed Khan was an adviser to Karzai on tribal issues and was close to the president, a fellow Pashtun.

—May 21: A suicide bomber wearing an Afghan soldier uniform slips inside the main military hospital in Kabul and kills six Afghan medical students.

—Jan. 12: A suicide bomber on a motorbike targets a minibus carrying Afghan intelligence employees, killing at least two and wounding more than 30.

—May 18: A Taliban suicide bomber attacks a NATO convoy, killing 18 people including five American troops and a Canadian soldier.

—April 19: An explosion at an Afghan National Army facility just outside the capital kills an American soldier.

—Jan. 26: A suicide car bomber strikes a barrier outside a U.S. base in Kabul, wounding six Afghans and eight American troops.

—Jan. 18: A team of suicide bombers and gunmen target government buildings, leaving 12 dead, including seven attackers.
Posted by Peter at 9:10 AM