The Rise of the New American Security State 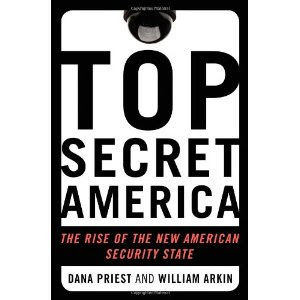 On Friday the Washington Post excerpted a chapter from the book Top Secret America: The Rise of the New American Security State.

The book grew out of a two year investigative study into government secrecy following 9/11 by reporters Dana Priest and William M. Arkin.

"The CIA’s armed drones and paramilitary forces have killed dozens of al-Qaeda leaders and thousands of its foot soldiers. But there is another mysterious organization that has killed even more of America’s enemies in the decade since the Sept. 11, 2001, attacks.

Since 9/11, this secretive group of men (and a few women) has grown tenfold while sustaining a level of obscurity that not even the CIA has managed. “We’re the dark matter. We’re the force that orders the universe but can’t be seen,” a strapping Navy SEAL, speaking on the condition of anonymity, said in describing his unit."

Details on the Joint Special Operations Command. The command became flagship of the US counterterrorism arsenal under General Stanley McChrystal who took over in the fall of 2003. Some quotes below.

"The president has given JSOC the rare authority to select individuals for its kill list — and then to kill, rather than capture, them. Critics charge that this individual man-hunting mission amounts to assassination, a practice prohibited by U.S. law. JSOC’s list is not usually coordinated with the CIA, which maintains a similar but shorter roster of names."

"Created in 1980 but reinvented in recent years, JSOC has grown from 1,800 troops prior to 9/11 to as many as 25,000, a number that fluctuates according to its mission. It has its own intelligence division, its own drones and reconnaissance planes, even its own dedicated satellites. It also has its own cyberwarriors, who, on Sept. 11, 2008, shut down every jihadist Web site they knew."

"JSOC’s lethality was evident in its body counts: In 2008, in Afghanistan alone, JSOC commandos struck 550 targets and killed roughly a thousand people, officials said. In 2009, they executed 464 operations and killed 400 to 500 enemy forces. As Iraq descended into chaos in the summer of 2005, JSOC conducted 300 raids a month. More than 50 percent of JSOC Army Delta Force commandos now have Purple Hearts."