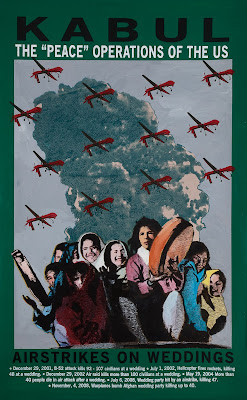 Last week Windows and Mirrors finished an amazing run in Atlanta. Here is a slideshow with highlights.

Next stop will be the Bay area with events and activities taking us through the 10 year milestone of the US invasion of Afghanistan.

To see the schedule of events. Click here and here

Mural Image: The ‘Peace’ Operations of the US Airstrikes on Weddings
Artists: Art Hazelwood and Juan Fuentes, San Francisco.

Juan Fuentes has been an artist, activist and teacher for over thirty years. His early poster art is part of the history of the Chicano Poster Movement. In 2009 he received the Art is a Hammer award from the Center for the Study of Political Graphics.

Art Hazelwood has long worked with homeless rights groups creating artwork on economic justice. He has organized and curated many exhibitions including retrospectives and touring group shows. His poster calling for the impeachment of George Bush is in the Whitney Museum of American Art.

"This mural is based on a poster created during the Spanish Civil War (1936 – 1939) to protest the aerial bombardment by the Fascists of civilian populations. The original poster showed a dead child and said, “MADRID The ‘Military’ Practice of the Rebels.” The sky in the poster was similarly filled with a web of bombers. In our mural we contrasted the bombers (in this case drones) with a traditional Afghan wedding celebration. The text at the bottom details six documented airstrikes on wedding parties in the course of the war, total civilian deaths are at least 367 at wedding parties alone. It goes without saying that an aerial attack on wedding parties represents only a tiny fraction of all civilian deaths in Afghanistan. Hazelwood and Fuentes collaborated on this mural."