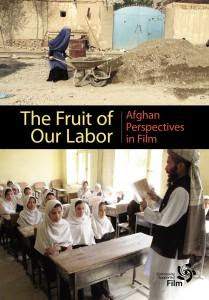 Each day for the next ten days Community Supported Film will release a new Afghan-made film from the collection The Fruit of Our Labor.

The collection features stories made by Afghans and about Afghans’ survival in their war-ridden country. Each documentary short offers a personal and first-hand point of view rarely seen or heard in the US, even after 10 years of intense media coverage. They bring to life Afghans’ daily efforts to address their challenging social and economic conditions – providing an insider perspective behind and beyond the battlefront.

After the refugees returned, post-Taliban, there was no girl’s school in the village. Waseema took things into her own hands, organizing the women, pressuring the resistant men, and setting up ‘classrooms’ in an abandoned, roofless, building on the outskirts of the village. The sounds of the girls calling out their lessons doesn’t disturb anyone - except for those who won’t follow their Mullah’s advice and allow their daughters and sisters to attend. 12 min.

Excerpt from "'L' is for Light, 'D' is for Darkness" by Hasibullah Asmaty from Michael Sheridan on Vimeo.

Hasibullah Asmati: Hasibullah Asmati’s family is from Takhar and he lives in Kabul. He worked as a production assistant on the documentary Addicted in Afghanistan, and as a freelance production assistant with the Takhar province TV channel. Hasib is currently working with Community Supported Film to make Brewing Tea in a Kettle of War, which will look at best practices in economic and social development from the perspective of Afghan villagers. Hasib is in Takhar province to capture one village’s attempt to come to terms with the cyclical terror of flashfloods and drought.
Posted by Peter at 11:20 AM