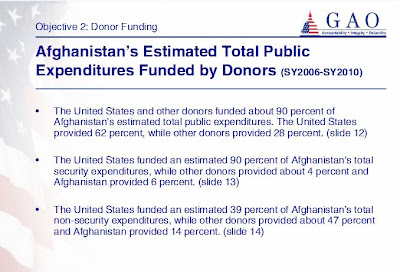 In government circles, the higher you are in the food-chain, the further removed you become from the impact of decisions on countries and people.

It was an initiative of the Comptroller General and does not include conclusions or recommendations.

Like previous reports on Iraq, you could wonder who is really paying the price?

What you will find are figures that reveal how our country is fighting its longest war in one of the world’s poorest countries. You also find authoritative figures on the extraordinary challenges facing Afghans to create a representative government that can meet the needs of the people.

What about the Afghan security forces?

It is noted in the report that there are no figures for “cost-effective and requirement-based estimates for future Afghanistan National Security Forces (ANSF) sustainment costs.” According to the Department of Defense, they are currently working with the Afghan Ministries of Defense and Interior on that.

Dependency, as seen through the US underwriting of a huge Afghan security force, distorts priorities. It will dictate the terms of the US-Afghan strategic partnership being discussed. Recent news reports indicate the partnership – once revealed - would keep US forces in the country until 2024.

The arguments of economic dependency are also policy. Affirming the principle that a nation, or a leader, does not accept aid without ideology or dependence.