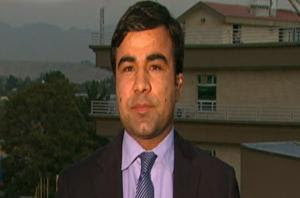 "In late August 2001, I had to flee Afghanistan because I happened to be working for an international organistation that was shut down by the Taliban. They also, somehow, decided to arrest its Afghan staff. So I decided to leave Afghanistan for a few days and go to Pakistan.

I was in Peshawar when 9/11 happened.

I was staying at a hotel and I used to take up the papers every morning. There were front page, large pictures of the twin-towers in flames. And, of course, 9/11 happened two days after al-Qaeda operatives assassinated Ahmad Shah Massoud. So that was still the main news on people's minds, certainly Afghans' minds. 9/11 just heightened people's anxieties and sense about impending change.

For Afghans at the time, after the assassination of Massoud, the feeling was that it was a matter of time before the Taliban ran over the remaining resistance. But once the US blamed Bin Laden for the 9/11 attacks, the picture changed. I certainly didn't think, during the first week, that the United States would use 9/11 to launch a full-fledged military campaign in the region. But with time, that became obvious.

Then I started working for the BBC, and we did some reports on what the refugee community thought about the war. We, for example, went to the refugee camp in Abbotabad, where Bin Laden was finally found ten years later. There were mixed views about the military campaign. There was widespread concern about possible damage to civilian life and property and there had been reports of a few stray bombs hitting civilians. Al Jazeera was one of the only media channels allowed to broadcast out of Afghanistan at the time, I remember. But there was also a sense of jubilation among the people, that they could return home-after being forced to take refuge two or three times in the previous decades. Some were refugees three times over. That they could return to a more peaceful Afghanistan because the United States, the most powerful country in the world, had finally decided to intervene.

People drew the connection to the military campaign launched in Afghanistan- they did not know all the details of the 9/11 attacks, but they knew that a big attack had happened in the united States that had connection to folks in Afghanistan who were not afghans but Arabs.

I think in the opinion of the vast majority in this country, the removal of the Taliban and the intervention of the international community- under a UN mandate, let's be clear about that- provided a lot of us a golden opportunity to the turn the page on more than 20 years of tragic conflict. The buzz words back then were: a new Afghanistan, a new beginning, a better future. That was because people saw the possibilities.

I think, on balance, we probably could do better. But because we are where we are today, Afghanistan is a better country than it was in 2001. It is a transformed country in so many different ways. In terms of infrastructure development, healthcare, education, emergence of a national economy, political and human rights.

The fact that today, compared to ten years ago, when you talk about human rights and elections, they are not alien concepts to the people of the country but embedded in the consciousness of the people speaks to the transformation from ten years ago.

But we still have major obstacles and challenges to overcome. And change takes time.

In the regional question for example, change in how a country views its interests and its approach to its neighbours takes much longer. That doesn't mean for us to give up and accept the status quo. We have been trying for the past ten years to convince our neighbors and the region that a stable Afghanistan is essential for the stability and security in the region. I think we have made some progress on that front. We are engaged in a substantially different conversation with Pakistan, where there is no denial of the facts on the ground. We talk frankly about all issues on the table-about where the Taliban are, for example. We are also discussing several economic projects. These developments I think are important to building trust and moving forward."

* Today (9 September) is also significant. Marking ten years since the assassination of Mujahedeen leader Ahmad Shah Massoud by al-Qaida suicide bombers posing as journalists. He fought Soviet troops and their allies in the 1980s and led the Northern Alliance against the Taliban in the 1990s.
Posted by Peter at 10:13 AM