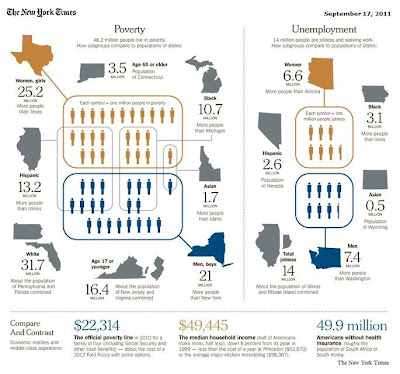 The article below was in the Los Angeles Times yesterday. I have linked it to the graphic above that appeared in yesterdays New York Times in a piece entitled The Impoverished States of America.

Ten years into the war on terror, the U.S. has largely succeeded in its attempts to destabilize Al Qaeda and eliminate its leaders. But the cost has been enormous, and our decisions about how to finance it have profoundly damaged the U.S. economy.

Many of these costs were unnecessary. We chose to fight in Iraq and Afghanistan with a small, all-volunteer force, and we supplemented the military presence with a heavy reliance on civilian contractors. These decisions not only placed enormous strain on the troops but dramatically pushed up costs. Recent congressional investigations have shown that roughly 1 of every 4 dollars spent on wartime contracting was wasted or misspent.

To date, the United States has spent more than $2.5 trillion on the wars in Iraq and Afghanistan, the Pentagon spending spree that accompanied it and a battery of new homeland security measures instituted after Sept. 11.

How have we paid for this? Entirely through borrowing. Spending on the wars and on added security at home has accounted for more than one-quarter of the total increase in U.S. government debt since 2001. And not only did we fail to pay as we went for the wars, the George W. Bush administration also successfully pushed to cut taxes in 2001 and again in 2003, which added further to the debt. This toxic combination of lower revenues and higher spending has brought the country to its current political stalemate.

There is only one other time in U.S. history that a war was financed entirely through borrowing, without raising taxes: when the Colonies borrowed from France during the Revolutionary War.

Even if we were to leave Afghanistan and Iraq tomorrow, our war debt would continue to rise for decades. Future bills will include such things as caring for military veterans, replacing military equipment, rebuilding the armed forces and paying interest on all the money we have borrowed. And these costs won't be insignificant.

History has shown that the cost of caring for military veterans peaks decades after a conflict. Already, half of the returning troops have been treated in Veterans Administration medical centers, and more than 600,000 have qualified to receive disability compensation. At this point, the bill for future medical and disability benefits is estimated at $600 billion to $900 billion, but the number will almost surely grow as hundreds of thousands of troops still deployed abroad return home.

And it isn't just in some theoretical future that the wars will affect the nation's economy: They already have. The conditions that precipitated the financial crisis in 2008 were shaped in part by the war on terror. The invasion of Iraq and the resulting instability in the Persian Gulf were among the factors that pushed oil prices up from about $30 a barrel in 2003 to historic highs five years later, peaking at $140 a barrel in current dollars in 2008. Higher oil prices threatened to depress U.S. economic activity, prompting the Federal Reserve to lower interest rates and loosen regulations. These policies were major contributors to the housing bubble and the financial collapse that followed.

Now, the war's huge deficits are shaping the economic debate, and they could keep Congress from enacting another round of needed stimulus spending to help the country climb out of its economic malaise. Many of these war debts are likely to continue to compromise America's investments in its future for decades.

For years, the public failed to adequately question how it was possible that we could spend and borrow so freely, with so few consequences. But now the painful legacy of these decisions has become clear. Throughout the past decade, Congress routinely approved huge "emergency" appropriations to pay for the wars. This process preempted the usual scrutiny and debate that accompanies large spending bills. In part, this is because the U.S. lacks the basic accounting tools necessary for informed debate. Our future debts from the war are not listed anywhere in the federal government's budget. We don't even know for certain where the money has been spent. The Pentagon hasn't produced a clean financial audit in the 20 years since government auditing began, nor has it developed an accounting framework that would allow an assessment of the future costs of current decisions. This has almost certainly increased the overall cost of the war.

Our response to Sept. 11 has weakened both the current economy and our future economic prospects. And that legacy of economic weakness — combined with the erosion of the credibility of our military power and of our "soft power" — has undermined, rather than strengthened, our national security.

Nearly 10 years into the Afghanistan war, the violence in that country shows little sign of abating. August was the deadliest month of the war yet for U.S. troops, and there were also multiple attacks on Afghan security forces, government officials and civilians. The surge in violence comes as NATO is drawing down and handing over security control to national forces. But tens of thousands of U.S. military personnel are scheduled to remain in Afghanistan through the end of 2014.

The costs of fighting the war on terror have already been far higher than they needed to be. The U.S. should not take on even greater war debt without understanding the true costs of continuing down that path.

Linda J. Bilmes is a faculty member at Harvard University. Joseph E. Stiglitz is a professor at Columbia University and the recipient of the Nobel Prize in economics. They are coauthors of "The Three Trillion Dollar War: The True Cost of the Iraq Conflict."
Posted by Peter at 12:51 PM