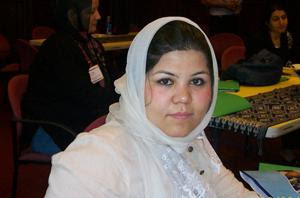 "At the time, I was working with an international humanitarian aid organisation in Peshawar, Pakistan, that was supporting Afghan refugees. The organisation also carried out emergency support projects for Afghans inside the country. Occasionally, I came to Kabul and visited some provinces, but of course I had to show it as a completely private visit and I had to be accompanied by male family members.

On September 11, 2001 which was a work day, I was at the Zakhail camp in Peshawar. I had a focus-group discussion with women and girls on some of hygiene issues and they were asking for literacy courses, though some of the Jihadi commanders at the camp prevented it.

Myself and another colleague decided to speak with one of those former commanders and try to convince him to allow classes. As we were debating the issue with him, his son came running in and said there was a messenger for him from Jalalabad.

Later on, from the others in the camp, we learned attacks had happened in New York and that he was called to the frontlines as the Afghan opposition fighters against the Taliban wanted to make use of the opportunity.

When we saw and heard about the attacks through international media in Peshawar, my first impression was that it was done by the same people that the US had supported during the Jihad against the Soviets. US dollars and ammunition of the Arab countries during the Soviet war turned our national resistance movement against the Soviets into a proxy war for the advantage of capitalism. Our war commanders won and the Afghan nation lost in a perpetual factional war.

But I also realise that the September 11 attacks opened a new-page in the modern history. Afghanistan never received this much international attention before.

Today, at least the visible activism I do for Afghanistan nationally and internationally can be attributed to the new political regime that came after September 11 in Afghanistan.

Also on the positive side, I think some of the Afghans were able to use the opportunities and create a space for civil society development. The freedom of media (somehow), women's organisations, activism, and of course private sector development can also be attributed to the aftermath of September 11, 2001 in Afghanistan. Though very fragile, some foundation has been laid out.

But we still need to find more legitimacy in Afghan society because since our projects are supported internationally, our activism is also seen as a 'foreign project' even though we're putting our lives and risking our lives.

However, the bombing of Afghan villages within the Operation Enduring Freedom was for the purpose of Osama Bin Laden and his supporters. As a result of the US bombing, the Taliban regime fell and a new power structure enabled women's political and social participation. But women's progress can only be indirectly accredited to the aftermath of September 11.

I believe the biggest mistake of the aftermath of 9/11 was that Afghanistan was that they did not have a long term vision for the country. The US and its allies did not even bother to correct their past mistakes of supporting individual warlords and tribal leaders for their own purposes. Today Afghanistan is suffering in the hands of the same warlords that actively destroyed the country during 1990s factional war. The reason that people have lost faith in the government and going towards the Taliban are these warlords, now in suit and tie, holding very important positions."

* Today (9 September) is also significant. Marking ten years since the assassination of Mujahedeen leader Ahmad Shah Massoud by al-Qaida suicide bombers posing as journalists. He fought Soviet troops and their allies in the 1980s and led the Northern Alliance against the Taliban in the 1990s.
Posted by Peter at 10:20 AM